Skip to content
Barcelona, like many of Europe’s elite, are a side I love to complain about. It’s primarily down to incompetence from the board, focusing on galactico signings instead of continuing on the path Cruyff set and Pep developed. Their work resulted in the most exceptional team in the Champions League era, mostly focused on La Masia graduates and some significant signings in Dani Alves, David Villa and Seydou Keita. It’s what made Pep’s 2011 side so magnificent. A majority of that starting XI was built with players who knew the Barcelona system. It’s why Pep has never been able to build a team as good as his treble-winning side. While his Bayern side had an idea of how Pep wanted to play through Louis Van Gaal, he had to start from scratch at Manchester City, which is why his first season in England was so underwhelming.
Embed from Getty Images
The problem with Barcelona since Neymar’s signing is they’ve basically turned into Real Madrid. Losing the best manager of the modern game is going to have an effect on how much value you can get out of specific players. However, the change in style and player profile has been the most significant issue regarding Barcelona since Pep’s departure. Barcelona were never a tiki-taka side because they had so much purpose in possession. They would break teams down through counter-pressing, wingers stretching the defensive line and Messi being fantastic. Pep had all of his players actually work defensively, and it’s what made them so different to Real Madrid. They never allowed any player to have a completely free role.
I bring this up because Barcelona’s 5-2 win over Betis was the first time in a while, where I’ve seen Barcelona actually look like a team. They weren’t perfect, far from it, but they showed signs of showing that aggressive counter-press with actual wingers. While this will not continue when Messi and Suarez return, it’s good to see Barcelona play well without their star players. To make it very clear, I have not watched much of Barcelona in the past couple of years. With La Liga being a pain regarding its TV rights, I only managed to watch them in the Champions League. I also missed their defeat to Bilbao, where I heard they were awful.
Here’s how Barca set up for this game: 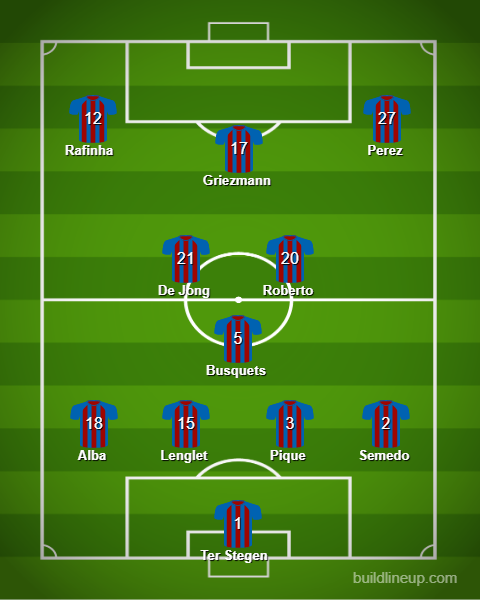