The Bundesliga table is a mess, to put it bluntly. RB Leipzig, Schalke and Dortmund have all had relatively good starts to the season, yet find themselves outside of the top 4. The teams ahead of them, excluding Bayern Munich, are quite surprising, but at the same time fully deserve to be there. Freiburg are arguably the biggest surprise, with Christian Streich’s side having a strong, yet very fortunate start to the season. I doubt they’ll be able to keep it up and will eventually drop out of the Champions League places. Wolfsburg are a more exciting team. Oliver Glasner only arrived in the summer and has already turned a very ropey team into a solid one, only conceding 4 goals this season. However, the attack has been super reliant on Wout Weghorst, who has been sensational this season. It’ll be interesting to see how they perform once facing the likes of Bayern and Dortmund. Speaking of Bayern, the champions have been their usual fantastic selves, and I fully expect them to get back to that top spot.

Now let’s start about Marco Rose and Borussia Monchengladbach. There isn’t much I can say regarding Wolfsburg and Freiburg because I haven’t had a chance to sit down and watch them, but I have seen quite a bit from Gladbach, and they’ve been fantastic. Do they deserve to be top of the table, not quite, but definitely deserve their place in the top 4.

I have spoken about them before, but a lot has changed at Gladbach since the first couple of games. Rose has been experimenting with his players and still looking to find his best XI. In their first game against Schalke, Rose lined up his side in a 4-3-1-2 with this team:

Gladbach weren’t necessarily bad when sticking with Rose’s preferred formation, but it wasn’t getting the best out of his players. His full-backs were offering a majority of the width, and while Lainer did excel at doing this at Salzburg under Rose, it made Gladbach a lot more predictable. Neuhaus was the other problem. He is clearly a talented player, but he just wasn’t pushing up far enough to support his forwards.

When playing in centrally-dominant formation, your midfielders have to do a lot in the final third, either making those late runs into the box or pushing wide to offer width. Beres had the right idea here, moving close to Lainer and trying to provide support.

The forward three were the other problem, more specifically, Marcus Thuram. I like Thuram, and while there is a lot of rough edges around his game, he clearly works better starting on the left side. His strengths are his dribbling and using his size to his advantage. He will consistently outmuscle opposition full-backs and keeping him on the left side, will give Gladbach such a threat. He is still very young and could turn into a number 9, but his tireless work rate and confidence on the ball currently make him more of an asset on the wing. Schalke were playing quite a compact defence, and needed players to help stretch them open. Gladbach managed 16 shots in this game, yet only 4 were on target.

After some mixed results in this 4-3-1-2, with an embarrassing defeat to Wolfsberger in the Europa League showing there is still plenty of work needed to turn Gladbach into a consistent Champions League team. Rose actually changed the formation to a 4-2-3-1 against Leipzig, with Johnson coming in for Benes. This didn’t work, with Leipzig truly showing their quality and creating some high-quality chances and exposing Gladbach’s somewhat immobile centre-backs. What was more worrying was how often Leipzig were attacking down Wendt’s side. It was something I had my reservations on, being the amount of game time the now 33-year-old would get this season.

Yet, Rose has addressed most of my early criticisms of his team already. Their hugely impressive 5-1 win over Augsburg was their best performance of the season and saw some of their players have their best games. After an excellent 0-3 away result against Hoffenheim, Rose made some significant changes, with Neuhaus, Wendt, Elvedi and Embolo all dropping to the bench, being replaced by Benes, Bensebaini, Jantschke and Herrmann respectively: 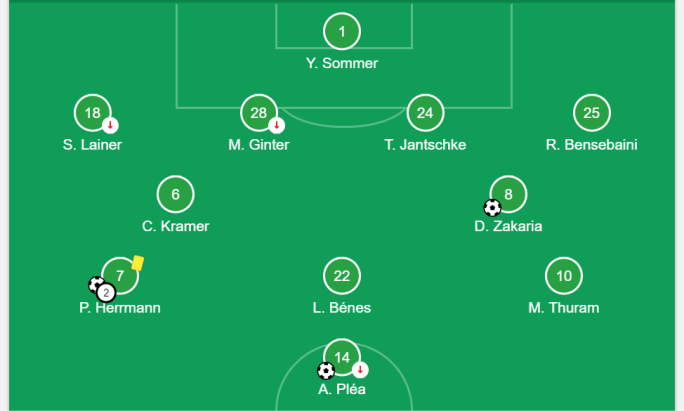 Rose went back to the 4-2-3-1, to take advantage of Augsburg defensively-poor full-backs of Max and Lichtsteiner. The former Arsenal defender had such a bad time against Thuram that he was replaced at half-time. The first two goals were largely down to Thuram beating Lichtsteiner with speed and power, and merely playing a ball across the box, first to Zakaria, and then to Herrmann. Rose made the right changes for this game, and the versatility both he and the players possess is starting to become quite prominent.

Having players start in wide areas not only exposed Augsburg but kept Gladbach organised defensively. It meant Lainer didn’t need to be the sole provider for width, and it allowed Bensebaini to focus on what he does best; defending. The former Rennes defender has never put up high dribble or chance creation numbers but has consistently shown himself to be a great ball winner. Playing him here, when the player in front of him not only works hard for the team but offers so much in attack, is perfect.

However, this huge win is not a reason to completely discard Rose’s preferred formation. The 4-3-1-2 has its place against teams with a weak midfield, where extra runners would cause a lot of problems. Gladbach have already shown themselves to be versatile and Rose to be as adaptable as I expected him to be.

The midfield has also seen much improvement since the start of the season. Zakaria is no longer the most defensive out of the midfielders and uses his fantastic dribbling to advance the ball and push forward. After a couple of years of looking like he could become elite, Zakaria has been absolutely fantastic. No other midfielder in the country has been as incredible as the Swiss international, with only Joshua Kimmich coming close. Christoph Kramer has taken the selfless task in protecting the back four and allowing Zakaria to contribute in attack. While he isn’t as active defensively as he was in 2014, it’s what he does for the rest of the team that is key, in allowing them to express themselves. Florian Neuhaus is a player who is yet to impress me this season, but is clearly talented. He actually possesses a similar skillset to Zakaria, being a great dribbler and actually can take set pieces, but Zakaria has that added benefit of size and power. It’s difficult to see how Benes, Zakaria and Neuhaus can all play together in the same midfield, considering they all don’t want to be the deepest midfielder, but all are young, and one of them could turn into that role.

Lazslo Benes is a player who has intrigued me throughout the first couple of months of the season. He is clearly a talented player, able to effectively find space to receive a pass, while also putting in his fair share of defensive work. Benes can play as either an 8 or a 10. His stats have looked very good, but he has been Gladbach’s leading set-piece taker, meaning a majority of his key passes and shots have come from a dead ball situation. Yet, when you watch him play, you notice how he is a very positive player, always looking to move the ball forward and play some one-twos. He offers something different to Breel Embolo. The former Schalke forward is definitely more of a goalscorer than a natural number 10. Embolo’s strengths are in dribbling and goals. Benes offers an entirely different skillset in that position. The Slovakian midfielder is currently 22, so I hope this season becomes the year in which he turns into a top player. Rose has stressed before that Benes is a crucial player for him.

So I have been very impressed with Rose’s debut season as of yet, but I have my reservations, primarily the opponents they’ve faced. Schalke and Leipzig are probably the best opposition they’ve faced, who they failed to beat. Their first game after the international break is Borussia Dortmund, a team who could either walk all over them or not turn up. It’s their second big test to see if Gladbach can compete against the top sides. I still expect them to remain fighting for the Champions League places, but by May, it could be close.